The Oxford English Dictionary (OED) defines the word as “the formation of a word from a sound associated with what is named (e.g. cuckoo, sizzle)”.  Put another way, words that sound like sounds.  I have always been deeply moved by Wilfred Owen’s line in the First World War poem Anthem for Doomed Youth:  “the stuttering rifles’ rapid rattle“.

This website is dedicated to the beauty and meaning of words.  The former is of course in the eye of the beholder while meaning is supposedly to be determined by the reader or listener and not the writer.  I am more concerned with the effect of words, what they conjure up in our imaginations rather than their literal meanings.

There is no way that the subject matter of Anthem for Doomed Youth is beautiful, but there is beauty in how “stuttering rifles’ rapid rattle” sounds.  The alliteration and onomatopoeic effect which it creates gives us that pleasure.

And there are lots more words that sound like sounds – sizzle, tweet, whizz, zoom for example and lots more – but I am more interested in the music and elegance that words project and the images they convey to you, the listener-reader.

I think of how Schweppes have used their name onomatopoeically to conjure up the sound of a tonic water bottle cap being twisted to release that “ssshhh” sound, but more intriguingly for me is the word that is associated with that ssshhh:  effervescence.  That’s a word where you can hear that fizz and see the bubbles.  Even more so in the pouring of Champagne. 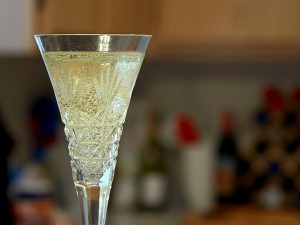 So cheers and we’ll add effervescence to our Word List.

5 thoughts on “Words That Sound Like Sounds: Onomatopoeia Sizzles!”