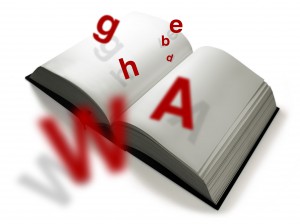 Ameliorate – A word chosen by Stephanie which undoubtedly makes better the words in this list.  Check out Stephanie’s website https://transgenderfriendshipclub.com/ to improve your feelings about life

Anemone – A flower or a marine animal.  Neither probably an enemy

Antediluvian – Ancient and completely out of fashion.  No wonder I relate to this word so well!  I love the OED definition:  “Of or belonging to the World before the Noachian deluge” [1657] – brilliant.

Antique – Not as old as Antediluvian (see word list) and much more stylish.  Very often associated with furniture, the decorative arts, books and dowager duchesses – objects which are delicate and usually very expensive.

Apposite – Not “appropriate” mis-spelled; not “opposite” either, apposite (pronounced appo-sight) is the most apt or well chosen word in the circumstances.

Bifurcate – Divide into two branches, just as I am divided in the opinion that it should also mean to ‘burp’.

Brigand – A rogue pirate, me hearties, or a forest robber, such as Robin Hood (allegedly) or other such rascally dog.

Building – An ordinary word but when built with differing fonts takes on a formidable visual presence, like high-rise apartments or offices.

Cadence – The fall in pitch at the ending of a musical or spoken phrase.  A falling inflection.

Cardamom – Beautiful pungent spice for all Moms to use in their exotic dishes.

Cascade – To fall in folds as water in a waterfall

Catacombs – Underground burial chambers.  Not to be confused with cat combs

Catatonic – state of well-being that little furry cats get into when being petted or just sleeping lazily when they should be working.

Charm – When a man today is charming others are wary, often thinking him a sleaze, a flatterer.  What an absolute shame when his signal intent is to delight or arouse admiration but I suppose  the negative connotation has been brought about by the duplicity of man in merely attempting to deceive rather than charm.

Clash – Amongst other things, the sound of musical cymbals coming together, not to be confused with symbols clashing together though that does sometimes occur too.

Darkling – Relating to the growth of darkness

Décolletage – The plunging neckline on a woman’s dress without which there would be no cleavage and that would be a sad sight to see.

Defalcator – Sounds much worse than its meaning of someone that misappropriates funds for which they are responsible.  Definitely has connotations of something odious and not to be trodden in I reckon.  Should always be written in brown text.

Effervescence – Wonderful bubbles, especially the fizz in Champagne.  I know some people that are effervescent;  bubbly personalities, lively, fun.

Euphemism –  A roundabout expression taking the place of a word that is too harsh or blunt, e.g. “pass away” for “die”.

Exquisiteness – The piquancy of a thing that is beautiful or delicate.  The word takes the object of beauty to its finest point of elevated discernment and appreciation.

Garam Masala – Garam means “hot” and masala is a mixture of spices, and is highly aromatic, so whether you smell it, eat it or simply say it, there is much pleasure to be had from the words.

Ginger – Thoroughly ugly to look at in its raw state, changing to the beautiful swan of spices when sliced and put into your cooking.

Gossamer – Not only does this word sound soft but the mind’s eye can surely see that downy, spider web-like material, light, floaty, blown away by the gentlest breath.  Linger on the “ss” sound to get the best effect and the “… amer” just tails away into the air.

How Do You Do – A greeting, not a question

How Do You Do? – A question, not a greeting (see the craftily clever difference?)

Incongruent – Out of keeping, disagreeable, nonsensical

Inglenook – A space within the opening on either side of a large fireplace, especially designed for old coaching inns or old pubs for men with dogs and a need for real ale and good banter with like-minded imbibers.  A warm and happy place especially in winter when it is raining or snowing outside.

Lollipop – A great word to get your mouth around.  You must say it out loud for the real effect.  Let your tongue lick the ‘lolli’ and finish it off with a lip-smacking ‘pop’.  Go on, you know you want to!

Magniloquent – A lofty or grandiose manner of speech, speakers tend to be prone to being
a) pompous, b) bombastic, c) boastful or d) all of the above.

Noblesse – Of noble birth or standing.  Not necessarily nobility, per se, but of the privileged class or aristocracy.

Obfuscate – A great word nominated by Stephanie from Canada – see “ameliorate” above, which I am sure you won’t find bewildering or stupefying.

Obsequious – Excessively or sickeningly respectful.  See Nicholas Lyndhurst’s portrayal of Uriah Heep in the BBC version of Charles Dickens’ David Copperfield – the best Heep on film.  Better still, read the book.  One of my favourites.

Paprika – Beautiful, red spice made from the chilli plant.  Yummy.

Pizzicato – Musical term for the plucking of the strings of a violin, viola, etc by the fingers.

Profane – A F***ing word that has more to do with Belgium and Canada (see Post) than it does the Church.

Propane – A flammable gas, likely to cause as much of an impact as a profane word these days.

Refinement – Polished behaviour; having a discernment of taste; presenting a cultivated and civilized appearance.

Rhyme – two or more words that sound the same.

Rhythm – the count or beat in a phrase, whether spoken or musical.

Rubricate -To mark or colour with red

Sauvity – Usually applies to gentlemen of charm (as defined) and sophistication.  Definitely think James Bond’s Sean Connery, Roger Moore, Daniel Craig et al and well tailored suits or  dinner jackets with bow ties.  Yes, I know, we’ve finished on dress but it’s hard not to with these chaps isn’t it?

Scissors – Apparently there are 596,580 different ways it can be spelt!  Sizzers, Cizzers, erm …

Smoodge – Spelled properly, it must contain the letter O at least eight times.  A word originating from Australia and New Zealand now undoubtedly a part of Puss-speak, meaning to rub up against my owners’ legs especially when wanting food.

Sooty – Of blackish or grey dusky hue.  Pal of Sweep

Star Anise – The name, its shape, its exoticism just abound in stylish spiciness

Syncopation – The displacement of beats or accents in a musical passage so that the strong beats become weak and vice versa.

Tea-leaf – Some dreg found at the base of a dark pot or, London born thief.

Ubiquitous – Stephanie (see website https://transgenderfriendshipclub.com/) has offered this great word as it reflects the feeling very much of its meaning in that it is seemingly everywhere and always with us,  Sounds like love of life!

Verisimilitude – Just looks, sounds and speaks so well.  It rolls off the tongue.  Say it out loud, it’s beautiful.  Oh, and it means having the air of being true, a resemblance to reality but that’s not really the point.

Waistcoat – Apologies firstly to all Americans.  The word is waistcoat not vest and it must be pronounced with great pomposity, “westcut”.  Think of fancy ones, colourful ones.  If you have seen the movie Four Weddings And A Funeral think of Gareth’s wonderful and extravagant ‘westcuts’.  If you haven’t seen the movie, go immediately to Amazon and buy a copy.

Wasp – Buzzy, stinging insect with black and yellow stripes and a very thin waist.  I used to know a girl like that!

Where – What place or position is the item?

Whisper – speak privately or conspiratorially.  Said properly the word has a wonderful onomatopoeic effect and always sends a tingle down my spine.