I am indebted to Percival Devante Esq for the following item found on the now defunct (great word to be looked at later) blog site Swell & Dandy.  It’s such a shame things must come to an end! 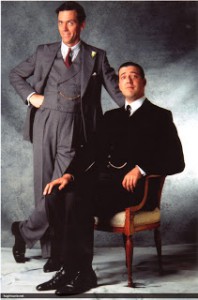 Set in 1930s England and America, P.G. Wodehouse’s ‘Jeeves’ stories in addition to the television series based on the former are riddled with charming, archaic English terminology and phrases.  If you don’t know the stories, you really are missing out.  Delay no longer and get the books here.

Or, view the series with Hugh Laurie and Stephen Fry here.

The Diction of Jeeves and Wooster

The following is a list of essentials with their definitions and explanations.  Feel free to slip them into every-day conversation to keep your friends on their toes.

Agog – (adj) Very eager or curious to hear or see something: “I’m all agog to see the Duchess’ new hat.”

Bally – (adj) bloody, damned [mild explicative]: “Get that bally dog out of the kitchen!”

To be all a twitter – (v) To be anxious or excited about something: “The Mater has been all a twitter ever since Mrs. Nelson told her the news about the Duke of Edinburgh.”

To be dashed – (v) To be confounded; used interchangeably with to be damned: “Well, I’ll be dashed!”

To biff  – (v) To strike or to punch: “If you don’t remove your elbows from the table I shall biff you.”

Blighter – (n) A fellow, especially one held in low esteem: “He’s a silly blighter, isn’t he?”

Blithering – (adj) Senselessly talkative, babbling; used chiefly as an intensive to express annoyance or contempt: “Mister Hooper, you are such a blithering idiot.”

By Jove! – (interj) [used as a mild oath to express surprise or emphasis]

Cross-patch -(n) A bad-tempered or irritable person: “O, don’t be such a cross-patch, Charles.”

Dash it all! – (interj) [used to express angry or dismay; interchangeable with damn it]

Drivel – (n) Silly nonsense; “How can you say such drivel?”

Frightful – (adj) [used for emphasis, esp. of something bad]

To get it in the neck – (v) To be punished or criticised for something: “She really gave it to me in the neck when I arrived late for dinner.”

Humdrum – (adj) Lacking variety or excitement; dull: “I don’t want to go to school, Mummy, maths is so humdrum.”

I say! – (interj) [used to express surprise or disgruntlement; often interchangeable with O my!]

Jolly well – (adv) very much; a phrase used for emphasis or enthusiasm: “I jolly well hope so!”

Look here! – (interj) [used to express disgruntlement or agitation with a person or persons]: “Look here, you swine! What do you think you’re doing?”

Milksop – (n) A weak or ineffectual person; whimp: “Don’t be such a milksop, Spencer, it’s only a kitten.”

Pipped – (adj) To get the better of; defeat.

To talk through one’s hat – To talk nonsense; especially on a subject that one professes to be knowledgeable about but in fact is ignorant of: “He’s never really met Lady Astor, he’s just talking through his hat.”

That’s not cricket – (interj) [used to express dismay at an instance of unfair or ungentlemanly conduct or proceedings]: “Mater, Helen has taken the whole sugar dish and refuses to share. It just isn’t cricket!”

What ho! – (interj) [exclamatory greeting, like saying what’s up]

What? – (interj) [used as a tag question, often to solicit agreement]: “Evelyn Waugh must be the greatest author of the century, what?”

With knobs on – (adv/adj) Extremely; in a similar way, but taken to an extreme: “The same to you with knobs on!”