There are many book stores online from which you are able to purchase items.  Are there too many? Is that possible?  Whilst it may not, there is a difficulty for the would-be purchaser in knowing where to go to find the desired tome.  Also, for those lovers of the written and spoken word, especially non-English speaking persons, knowing which books will both educate and entertain, is problematic.

Or so it was until now!

I shall be showing you below those books that I believe are worthy of purchase by you for your English understanding and edification.  There will be links to enable you to make those purchases and brief descriptions of the books themselves.  This will be a growing list but is by no means exhaustible.  I am sure there will be others that readers of this website feel should be included.  Of those I should be happy to receive your recommendations as to what and to why. Click here to leave a comment at the end of this page.

The vast majority of books that I recommend may be purchased through Book Depository (use the link here for general views of books or go to the specific book links that follow).

This link is my affiliate link which means you will be taken to the Book Depository website or to the book itself that you have expressed an interest in.  If you make a purchase through these links I will earn a small commission (hurrah!) so, in advance, thank you.

If this is your first time using the Book Depository website you may like to know that when you arrive at the product page, you should amend the currency to that of your country before adding the book to your basket.

You may continue shopping if you wish to read a little more about the book or purchase other books by adding them to your basket also.  When you are ready to make the purchase(s) click on “Checkout” or “Checkout with Paypal” if you prefer.  At checkout you will be asked to sign-in if you are a returning customer or to complete your details if you are a new customer.  The input your credit card details and your order is complete.  The book(s) will be sent to you completely free of shipping costs.

So, let’s begin with a book that whilst being classified as a children’s book is in fact a work written by Kenneth Grahame that, as biographer and writer Humphrey Carpenter put it, “The Wind in the Willows has nothing to do with childhood or children, except that it can be enjoyed by the young.”  But, surely, suggests critic Peter Hunt “it is a book about small and not so small animals—a Toad, a Rat, a Mole and a Badger (and therefore this must be a children’s book). If so, then these are animals who drink and smoke, own houses, drive (and steal) cars, row boats, escape from jail, yearn for gastronomic nights in Italy, eat ham and eggs for breakfast and write poetry—while Toad combs his hair, and the Mole has a black velvet smoking-jacket.”

My favourite edition of the book is the following with brilliant illustrations by Inga Moore: 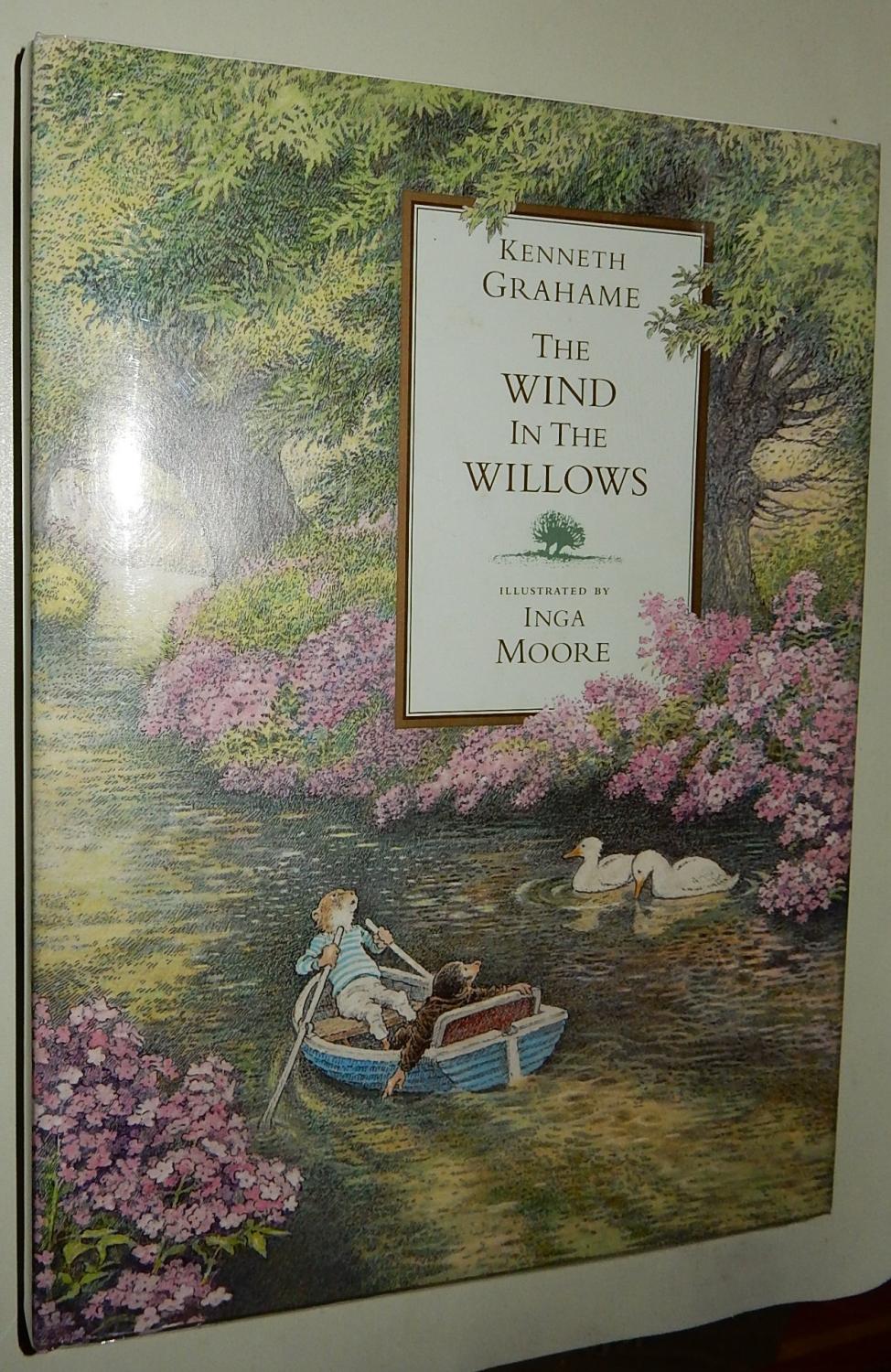 Buy it here: The Wind in the Willows

Staying with the theme of children’s literature, there are many good books that could be recommended but by again linking beautiful words with the lovely illustrations of Sir John Tenniel, the book Alice in Wonderland is highly regarded.  It has a magical appeal to both children and adults with imagination.

There is possibly too  much English-ness about the story for many non-English people but as I am concerned with that very same English-ness on this website then I am happy to recommend it to you.

“On an ordinary summer’s afternoon, Alice tumbles down a hole and an extraordinary adventure begins. In a strange world with even stranger characters, she meets a rabbit with a pocket watch, joins a Mad Hatter’s Tea Party, and plays croquet with the Queen! Lost in this fantasy land, Alice finds herself growing more and more curious by the minute . . .”

JRR Tolkien said that he wrote the books that form the trilogy, The Lord of the Rings, for his children.  To my mind this is not a children’s story even though it is about elves, wizards and dragons.  The popularity of the book just doesn’t seem to wane thankfully and there are always plenty of options available for you to purchase.

This book is, for me, the one book, that if I had to be lost on a desert island, I would want more than any others with me.  It has always had a special place on my shelves and in my heart and for that reason I recommend this to you most earnestly.  Now, there are lots of paperback editions that you could buy and perhaps your budget only allows you to do so but, if it is at all possible, you really should obtain a hardback copy to own and treasure.  Also, it must have illustrations by no-one other than Alan Lee.

The copy I suggest to you is this one:

It is – hold your breath – 1200 pages long (that’s why you must have a hardback edition) and contains maps and colour plates that are absolutely superb. It will be the crown in the jewels of your books!

If, for some reason, the book isn’t available for purchase an alternative with Alan Lee’s illustrations and in a lovely slip cover is:

A further option – and a little cheaper but without the illustrations – is this beautiful edition:

If you decide that none of these are for you then do ensure you buy whatever copy you can to enjoy the sheer brilliance and magic of Tolkien’s words.

The Hitchhiker’s Guide to the Galaxy is the work of a comedy science fiction genius, Douglas Adams. Originally a 1978 radio comedy broadcast on BBC Radio 4, it became a hugely successful 5-part trilogy.

One Thursday lunchtime, just seconds before the Earth is demolished to make way for a intergalactic hyperspace bypass, Arthur Dent is plucked off the planet by his friend Ford Prefect, a researcher for the revised edition of The Hitchhiker’s Guide to the Galaxy who, for the last fifteen years, has been posing as an out-of-work actor.  Together, the pair are thrown out across the galaxy – often by chance – on a trip of absurd misadventure.

Thomas Hardy’s powerful novel of swift sexual passion and slow-burning loyalty, centres on Bathsheba Everdene, a proud working woman whose life is complicated by three different men – respectable farmer Boldwood, seductive Sergeant Troy and devoted Gabriel Oak – making her the object of scandal and betrayal. Vividly portraying the superstitions and traditions of a small rural community, Far from the Madding Crowd shows the precarious position of modern woman in a man’s world.

First published in 1874, the novel is set in Hardy’s Wessex in rural south west England. It embraces themes of love, honour, betrayal, tradition and modernity.  The seemingly idyllic countryside in which it is set hides an often harsh and hard farming lifestyle that must learn to come to terms with change.  Change in farming methods; change in attitudes to women particularly.  The moods which Hardy portrays in the novel make it one of the greatest and most English of his works.

I first saw the movie of Far From The Madding Crowd as a teenager on a rainy day on holiday and I was hooked on Hardy.  I then bought the book which set in motion a lifelong love of his work.

Get the Book here

It could be any Agatha Christie book that appears here as they are all extremely good.  Murder On The Orient Express is, along with Death On The Nile, probably the most famous of her novels.

If you are yet to read any of them I heartily recommend them to you.   Most of the stories revolve around that wonderful Belgian sleuth Hercule Poirot but also include the indomitable Miss Marple as well as the wonderful pair Tommy and Tuppence plus others.

Just after midnight, a snowdrift stops the Orient Express in its tracks. The luxurious train is surprisingly full for the time of the year, but by the morning it is one passenger fewer. An American tycoon lies dead in his compartment, stabbed a dozen times, his door locked from the inside.

Isolated and with a killer in their midst, detective Hercule Poirot must identify the murderer – in case he or she decides to strike again.

What can one say about this giant of English Literature?  Modern readers may find the language a little tough going, but one should persevere, it will be well rewarded.

Dickens is remembered as one of the most important and influential writers of the 19th century. Among his accomplishments, he has been lauded for providing a stark portrait of the Victorian-era underclass, helping to bring about social change.

Great Expectations traces the growth of Philip Pirrip (Pip), from a boy of shallow dreams to a man with depth of character. From its famous dramatic opening on the bleak Kentish marshes, the story abounds with some of Dickens’ most memorable characters.

Among them are the kindly blacksmith Joe Gargery, the mysterious convict Abel Magwitch, the eccentric Miss Haversham and her beautiful ward Estella, Pip’s good-hearted room-mate Herbert Pocket and the pompous Pumblechook.

A must read.  From here.

“it’s a sin to kill a mockingbird.’

A lawyer’s advice to his children as he defends the real mockingbird of Harper Lee’s classic novel – a black man falsely charged with the rape of a white girl. To Kill a Mockingbird is a coming-of-age story, an anti-racist novel, a drama of the Great Depression in Southern America.

Through the young eyes of Scout and Jem Finch, Harper Lee explores the conscience of a town steeped in prejudice, violence and hypocrisy is pricked by the stamina of one man’s struggle for justice. But the weight of history will only tolerate so much.

Written by English novelist Elizabeth Jane Howard, the Cazalet Chronicles is a saga about the life of a large privileged family from the 1930s to the ‘1950s.

Beginning in 1937, the Cazalets Chronicles explores the affairs, passions and ambitions of the Cazalet family of Home Place, Sussex. From pre-war through to the Fifties, the three generations of the family experience love, loss, and, ultimately, life-altering change.

The books will break your heart several times over, but they’re also full of joy. The Cazalet children in particular are a real treat: I’m rarely, if ever, a fan of child protagonists, but Elizabeth Jane Howard is expert at creating believable – and likeable – children with inner lives as complex as any of the adults.

At the last look, the five set Collection wasn’t available, but the individual novels were.  Highly recommended

DESCRIPTIONS OF THE FOLLOWING BOOKS WILL APPEAR HERE SHORTLY

The majority of books that I recommend may be purchased through Book Depository. Use this link for general views of books or go to the link on this page of the specific book of your choice and click that.